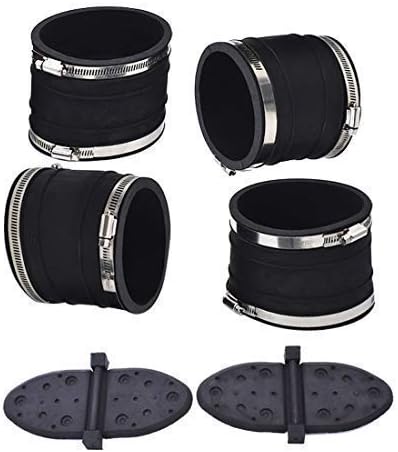 The bellow kit is designed to meet or exceed OEM specifications.
The bellow kit will come exactly as shown.
If you have ever overheated your engine these bellows and shutters tend to get damaged.
Often you will find pieces of them in the exhaust system when you remove the drive for servicing.
These help keep water from entering the engine through the exhaust system so they are very important.

These bellows and shutters are designed for the following MerCruiser applications:

For 1982-1996 engines, there are some 1996 and 1997 models that apply.
Fits the oval 4" Y-pipes with round pin holes.
If you have two rectangular holes for the grommets you will need the A1 water shutter.
If your Y-pipe changes size a few inches bellow the shutter you have a one piece manifold V6 Y-pipe and need shutter A2.